Turkey, against the embargo itself was able to develop its own indigenous engine Faced with america and canada embargo, turkey successfully producing its own unmanned aerial vehicle engine
An engine designed and produced by Turkish Aerospace Industries’ (TAI) engine manufacturing subsidiary will be used to power Turkish unmanned aerial vehicle (UAV) producer Bayraktar's Akinci and TB3 drones.
The new engine, produced by TUSAS Engine Industries (TEI), has the highest performance figures in its class globally, Selcuk Bayraktar, Bayraktar’s chief technology officer, said Thursday.
Sharing a video which included the test phase of the engine from the last month, he noted that it is not a prototype but a mass-production engine.
Canada announced that it has suspended arms export permits to Following Canada's move, Turkey's Defense Industries Presidency announced that Turkey's defense industry is proceeding on its way, regardless of embargo decisions.
"Our Common Aperture Targeting System cameras, which will be equipped on our armed UAVs, are going into mass production thanks to those who contributed," it said.
A Canadian engine producer has also stated that it has suspended selling aircraft engines to Turkey.
Several Turkish firms are active in the defense field through their cutting-edge military products such as armed UAVs, remote control guns, missiles, and air defense systems.
Especially Baykar and state-run TAI manufacture world-class aerial vehicles with local sources.
Turkey has conducted several successful operations in Syria with unmanned military vehicles.
Five Turkish firms -- Aselsan, TAI, STM, Roketsan and BMC -- are among the top 100 defense companies globally.


Thank you for the support.

armies are very important for the defense of countries. we greet all the heroes all over the world who fight for their country. This channel is the meeting point of patriots from all over the world. The hi-tech era, which started with Russia's sputnik satellite, continues with 5th generation fighter jets such as the f35. we follow these developments instantly. If you like our videos, don't forget to subscribe to our channel 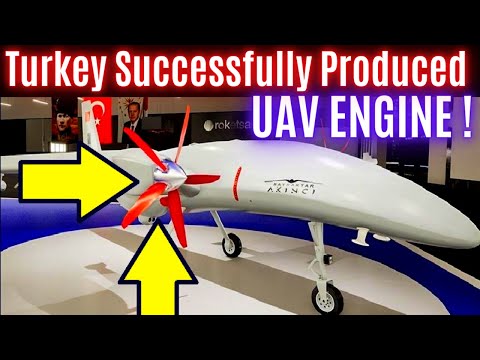 SOURCE: https://www.aa.com.tr/en/turkey/turkish-made-engine-to-power-countrys-uavs/2024035 Turkey, against the embargo itself was able to develop its ...