Added 1 month ago by
3 Views
For all its success after World War 2, the Convair B-36 Peacemaker strategic bomber was still a piston-engined machine, and it would not take long for it to be displaced by jet power.

However, as the 1950s began, the company conceived an idea to extend the career of its beloved bomber: they would create a jet-propulsion version that could enter the atomic era.

The new design requirements would take it far from its original concept, giving birth to an entirely different aircraft with sleek swept-back wings.

The Convair BY-60 would eventually be developed in parallel with the legendary Boeing B-52 Stratofortress, and they even shared the same engine model.

Equipped with an unrivaled payload capacity, the BY-60 was on its way to becoming the United States’ most competent atomic delivery platform…

Join Dark Skies as we explore the world of aviation with cinematic short documentaries featuring the biggest and fastest airplanes ever built, top-secret military projects, and classified missions with hidden untold true stories. Including US, German, and Soviet warplanes, along with aircraft developments that took place during World War I, World War 2, the Korean War, the Vietnam War, the Cold War, the Gulf War, and special operations mission in between.

As images and footage of actual events are not always available, Dark Skies sometimes utilizes similar historical images and footage for dramatic effect and soundtracks for emotional impact. We do our best to keep it as visually accurate as possible.

All content on Dark Skies is researched, produced, and presented in historical context for educational purposes. We are history enthusiasts and are not always experts in some areas, so please don't hesitate to reach out to us with corrections, additional information, or new ideas. 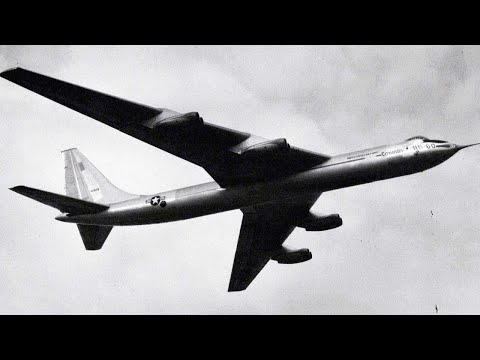 For all its success after World War 2, the Convair B-36 Peacemaker strategic bomber was still a piston-engined machine, and it would not take long for...